The answer to why dogs and tiny horses can be used in therapy for PTSD and why cats rule the internet lays squarely in the pulling power of cuteness.

But why do we find things cute and what are the commonly shared criteria for cuteness all over the world?

According to psychologist Dr. Sandra Pimentel, a psychologist at the Montefiore Medical Center in New York, the answer can be found in evolutionary biology, “If we think about evolution, our goal as a species is to survive and pass on our genes,” she says.

We find babies cute and adorable so that we are compelled to take care of them and to keep them alive.

By finding living things cute we are motivated to protect these organisms and this has an evolutionary role for humans who are hard-wired to care for children and small animals.

When we see these animals or babies, our brains reward us with dopamine, a feel-good hormone that makes us feel loved up when we see animals and babies in real life, on video and in images. This explains the intense and viral following of specific YouTube channels dedicated to cute cats, tiny ponies, and even the cult of anime.

This principle is also at work when we witness cute features in cartoons but cute features can even turn up in inanimate objects like the sides of buildings and cars which are anthropomorphised and turned given human emotions or cute qualities which then give us that much needed shot of dopamine. Afterall our emotional reactions are ruled by our genes, our hormones and our neurons.

The aesthetics of cuteness is an underlying element in storytelling from time immemorial. As we know from the lessons of the internet and viral video, cuteness isn’t only for the delight of children, it’s a universal human phenomenon that taps into our deepest and most enjoyable follies and injects desirable dopamine and feel-good energy into our lives.

Product marketing capitalises on the cult of cute in many ways that we’re sometimes not even cognisant of. This is because psychological studies consistently show that people want to buy things that have elements of cuteness embedded in them.

Kindchenschema: the criteria of cute

There is no English word to describe the elements of cuteness, but there is a German word. Kindchenschema was a word coined by academic Konrad Lorenz to shed light on the criteria shared by cute things, both inanimate and animate. 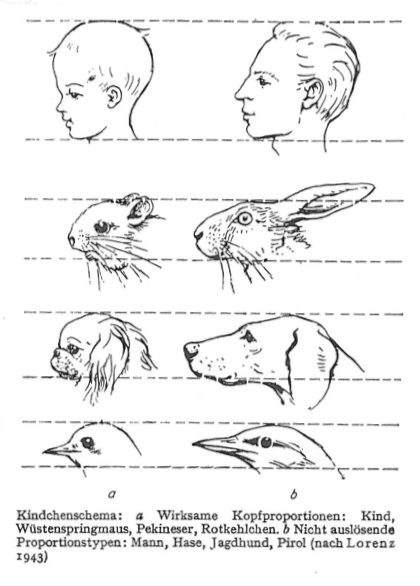 How did Pixar endear us to the alien-like miniature world of ants? By incorporating these qualities into the creation of their cartoon characters in the film Antz. Likewise with their film Cars, which brought to the screen a series of chubby, large eyed automobiles that were full of personality and moxy, and as a consequence were endearing to the audience.

Many studies in psychology show that we give our attention to things that are attractive and cute over non-cute things.

Why then is there an impulse with tiny cute things to clench them, bite them or otherwise behave in an aggressive way towards cute things?

Dr. Oriana Aragon, a psychologist at Clemson University, has studied this cute aggression: the desire to bite, squeeze, or eat something because it’s so cute.

This impulse is surprisingly common among many different cultures. There is a word in Tagalog for it gigil  which means gritting one’s teeth and having the urge to pinch or squeeze something that’s just too cute to handle.

According to psychologists, this impulse is called dimorphous expression. This is when you express something that’s different to how you are feeling. This happens when you laugh when you feel sad, or cry when you’re happy.

Gudetama Egg: The Hello Kitty of the Millennial Generation

A case in point is Gudetama.

Gudetama is a cultural phenomenon in Japan, and now all over the world. Gudetama is a lazy egg who refuses to shape up and be a functioning piece of food. In a culture so rampantly obsessed with work, consumerism and youth – Gudetama is the foil and a rebellion against that culture. Gudetama is the perfect anti-hero for millennials in both Japan and beyond. He is a caricature of Gen-Y apathy and he is cute precisely because he is so lazy, careless and melancholy. Can you see a theme here? Cuteness can also be stemming from melancholy or anger. Cuteness can become a commentary on the society it stems from.

Michael Corballis: Our Dogs can read our minds

Cute, Quaint, Hungry and Romantic: The Aesthetics of Consumerism (2000).

This book is the definitive pop culture encyclopaedia of consumerist aesthetics. It was so kitsch and fascinating that I decided as a 19 year old when I first read it, that I would go into advertising and marketing.  It really was avante-garde in that all of these internet phenomena hadn’t yet come into existence but it predicted very accurately (almost to the point of being spooky) the rise and rise of internet memes that are based around what’s quaint ( retro-cool hipsterism), romanticism (getting back to nature, coziness) and the cult of cuteness. Although this book predates all of these trends and in a way was a crystal ball into what future trends in consumerism would take. This book shows the reader the elements of the contagious appeal of different aesthetics and ideas and the  neurological, psychological and cultural underpinnings of certain objects in material culture. It was big an ambitious in scope and covered off cultural icons like Leonardo Di Caprio, teddies and Mars Bars. Anybody interested in cultural trends should get this book. Although everything it predicted in terms of popular culture in 2000 has now happened.

3 thoughts on “An exploration of the aesthetics of cuteness”