There’s something comforting yet eerie, hypnotic yet sexual about neon signs. They garishly proclaim sales on items, announce a lonely diner on a dark stretch of road, and tout the nefarious activities inside of peep shows and brothels.

Neon signs have always fascinated me. They seem to emanate a metaphysical glow as though there is a secret message that’s trying to get out from behind the sign. An aura from within that is all at once: lonely, soulful, menacing and emotional.

Neon signs only have meaning in reference to darkness. Therefore they are normally spied in-situ on an abandoned street, in cities, where things tend to happen to people while they are alone. They are found in places where people metamorphose into changed creatures, different from how they are during the day time. They are slightly more silken, sensual, alien, fluid and unpredictable.

This sign was put on sh0w to the passing traffic on a cold January evening this year. It’s shining on like a crazy diamond above a 99p shop at 259 High Street Walthamstow E17 7BH as a part of the Walthamstow Forest Street Gallery Project. Get there quickly before the project finishes at the end of April. 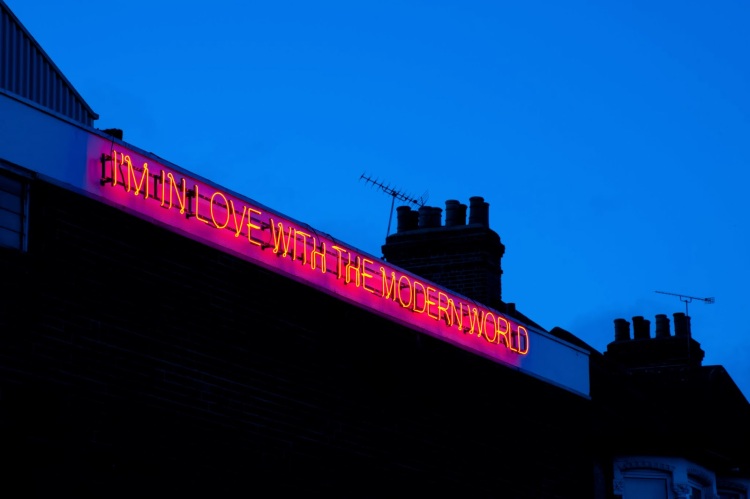 I’m in Love with the Modern World by DJ Roberts. Image Source

Chris Bracey is arguably Walthamstow’s most famous son. He has a quirky and wonderful little pad called God’s Own Junkyard where he showcases the iconic signs he made for films like Bladerunner, The Dark Knight and Iron Man and for labels Burberry and Alexander McQueen.  He also collaborated with art badass Martin Creed too. 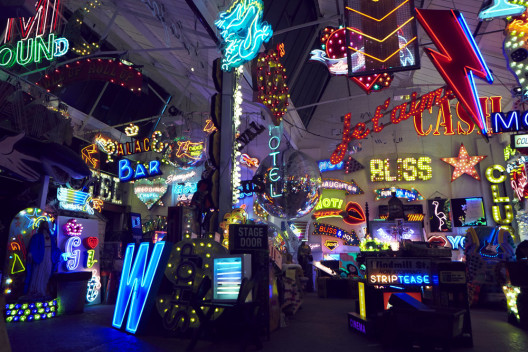 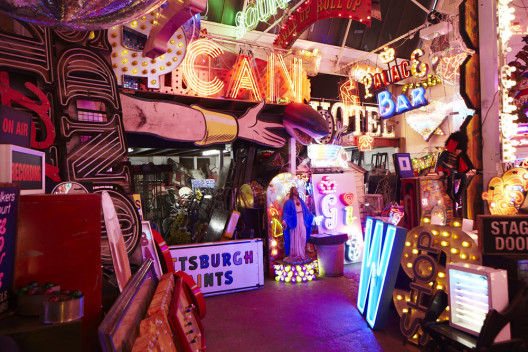 These are profoundly personal and emotional messages rendered in neon in Tracey’s own handwriting. I find them incredibly touching and deeply emotional. There’s a sense of desolation and magic that’s bestowed on neon words like this.

‘When I hold you, I hold your heart’ by Tracey Emin Image Source

“The people you love become ghosts inside of you and like this you keep them alive”, is Robert Montgomery’s first major work using solar power and LED. 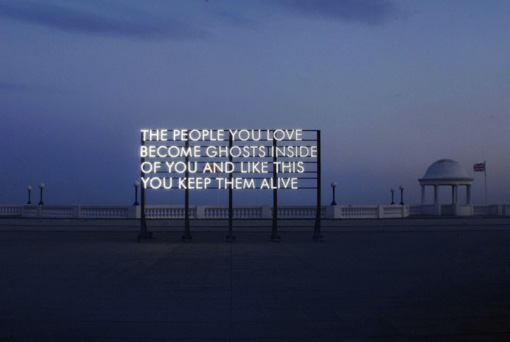 According to the Tate’s website ”A central theme of Creed’s work is the nature of art itself, the relationship between art and reality, art and life, a preoccupation of much modern art, and he explores the boundaries in interesting and unsettling ways.”

‘Everything is going to be alright’ by Martin Creed. Located at the Scottish National Gallery in Edinburgh. Image Source 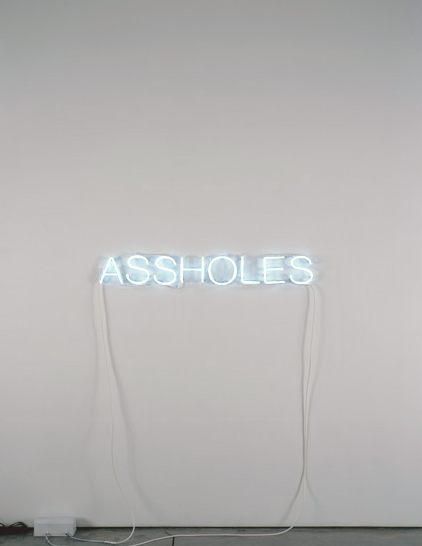 And here is where Creed really pushes some buttons. Take a look as he ”run’s thr0ugh” his work in the Tate Britain. Just a wee warning though, this video does get ”a bit racy” in parts!

Some people thought he was totally taking the piss and became infuriated by him. Others were confused or found it hilarious. Some other people got the intention and the delivery of the piece. Here are some of the more funny YouTube comments.

teamcrumb: i thought this show was fun, alive and cheeky but sincere and memorable in equal measure. If you can’t get the spirit intended in these works, go to another party, look at a Manet or Rodin, and shut the fuck up.

cullyvan3: Martin Creed is a cheeky monkey, a nihilist fucker cheeky monkey. Check out his “work” at edinburgh fruitmarket gallery 2010. He is a fucker.

The Museum of Neon Art

A blog dedicated to all things Neon Art

17 thoughts on “About Neon Art and Loneliness”