Pania is the legendary Kaitiaki (guardian/protector) of the reef in local Maori legend and her wairua (spirit) is connected strongly to the moana (ocean) close by to the town of Napier. Legend has it that Pania was a shimmering and iridescently beautiful maiden who lives in the sea and following a human encounter and a broken heart, she lingers there under the waves still.

By daylight Pania swam about with creatures of her reef world, but after sunset would go to a stream that ran into the bay. She would swim upstream to repose close to flax bushes. Karitoki, the very handsome son of a Māori chief, would quench his thirst every evening at the stream where Pania rested because it had the sweetest water.

He was unaware Pania was silently watching him with admiration for many weeks. Until one night she whispered a faint and yet intoxicating refrain. It carried on the wind to Karitoki who turned around to see Pania emerge from her hiding place.

Karitoki had never seen a young and beautiful maiden as Pania and so fell in love instantly with her shiny and thick dark hair and large eyes. Pania fell in love also, and they pledged their lives to each other and were secretly married.

Pania and Karitoki went to his whare (house) by the shadows of the eventide and so nobody but the moreporks (owls) saw them. At sunrise when Pania prepared to leave Karitoki begged her to stay a while longer.

Pania explained that as a creature of the ocean, when the sirens of the sea called her each morning, she could not survive if she didn’t return to them. She promised to return every evening and so their marriage of nocturnal passion and moving between worlds continued.

Karitoki soon boasted to his friends about his beautiful wife, but no one believed him because she appeared as an apparition and stayed only when the shadows lay thick on the land. Frustrated by this, Karitoki consulted a kaumatua (elder) of the iwi (tribe) about how to harness and ensnare the intoxicating ocean maiden named Pania. The kaumatua advised Karitoki that being a sea creature, Pania would be cursed to never return to the ocean if she swallowed cooked food.

That night, as Pania slept, Karitoki took a morsel of cooked food and put it in Pania’s mouth. As he did so, Ruru the morepork (owl) called a loud warning and Pania was startled from her sleep.

Horrified that Karitoki had put her life in jeopardy, Pania fled and ran to the sea. Her people came to the surface and drew her down into the depths as Karitoki swam frantically about the ocean looking for her. He never saw her again.

When people now look deep into the water over the reef, it’s possible to see Pania with arms outstretched reflecting in the beams of sunlight. Is she appealing to her former lover and imploring him to explain his treachery? Or is she expressing her continuing love? That all depends on who is doing the looking.

Moremore the infant son of Pania and Karitoki is now the kaitiaki (guardian) of the area. He is a taniwha (spirit) who often disguises himself as a mango (shark), pupuhi (stingray) or  Tuhinga o mua (octopus).

The Sea Wall Project: Pania of the Reef by James Bullough

James Bullough was part of the hugely successful SeaWalls project hosted by Pangeaseed in Napier where he captured the legendary story of Pania of the Reef in street art.

While in the area, James got to meet some of the local iwi and Maori kaumatua and historians who advised him on how best to portray Pania in all her glory and to provde a fresh and contemporary take on the legendary story. He was honored to highlight the pressing ocean conservation issue of ocean acidification. Due to man made climate concerns, specifically the raising CO2 levels in our atmosphere, the acidity levels of our oceans have risen and continue to rise at alarming rates killing our reefs and the delicate ecosystems around them worldwide. To illustrate in the wall mural, James depicted Pania floating defiant and hopeful over her reef despite the fact that below her all is void of all life and she herself is dissolving from the dangerously high acid levels. 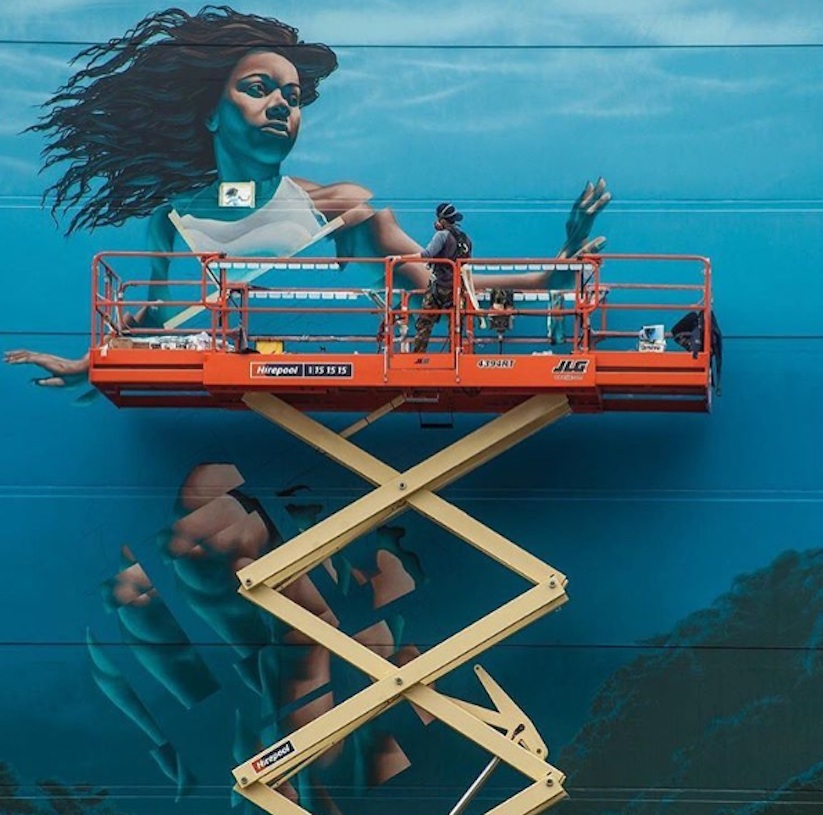 James Bullough is an American born artist living and working in Berlin, Germany. His paintings are phenomenal combinations of realist painting technique and graphic punctuation. Working in everything from oil, spray paint and ink on canvas, Bullough combines realistic elements with graphic areas and fractured or striated planes, through this he intends to challenge the viewer’s perceptions.

The Seawall Project: Pania of the Reef at Perfume Point, Ahuriri by Aaron Glasson

Aaron Glasson is the creative director of PangeaSeed and worked on a mural called Pania of The Reef at Perfume Point, Ahuriri. Aaron worked closely with local iwi to create his mural that depicts the story of her life, painting her decedents in the role of Pania and creating a contemporary interpretation this meaningful history.

The Seawall Project: Kaitiaki by Askew One

“With my mural for Sea Walls, Napier, I was attempting to address several interrelated issues. I think the deeper I look into issues like ocean conservation I realize that nothing happens in a vacuum. Everything is connected because we live on a planet that is actually a closed system. To allow things to recycle within that system we have to be conscious of consuming more harmoniously with the system as opposed to being so disruptive. I can talk about how we are driving climate change, how it is warming the planet and subsequently causing ocean acidification which is destroying the reefs and their complex ecosystems – what’s harder is to then unpack the myriad of related consequences.

Those range from the harm to all the planets creatures, the environment, economics, social and political. I cannot stress this enough – if you strip away all the talk, the political posturing and all the corporate spin, every issue we face as a species relates back to our relationship with this planet. Something that may sound as random or inconsequential to your life as a dead reef in small island nation will have an impact on everyone at some point. This mural is inspired by those thoughts and dedicated to all our neighboring Pacific Island nations, most likely the least contributors to the problem yet on the very frontline of the consequences of climate change. Big thanks to Frankie Adams for being the model for this work.”

12 thoughts on “The Māori legend of Pania: Kaitiaki and taniwha of the reef, retold as street art”