As an occasional driver along the Eastlink in Melbourne, I have had the odd experience of passing a hotel with no trace of human habitation around it. A hotel completely devoid of people and life and yet that lights up in a unique configuration of lights from fake windows each night.

Located in Melbourne’s south east, the fake hotel cost $1.2 million to erect and inside of its hollow and empty walls there resides nothing but dark shadows and clever folly. The hotel is 20 metres tall, 12m long and 5m in height, lending it an impossible cardboard box configuration.

Designed by local Victorian artist Callum Morton, he likens his Hotel to a parallel universe that had formed the basis of his art for a number of years. “Motorists will view it from their cars as an actual hotel, and perhaps over time as a strangely de-scaled prop that has escaped the theme park or film set. In this world things appear in unlikely contexts in oddly altered forms, as if they have been pushed down a portal from the recent past and popped out mistakenly in this time and place,” says Morton.

The hotel comes out of the monotonous and hypnotic freeway landscape like a surreal apparition. It could be a legimitate building, but then on a second glance, the dimensions and bleak nothingness of the field surrounding it, the perfect rectangular symmetry. The hotel suddenly becomes improbable and ominous, abandoned and post-apocalyptic in scale.

Everything that is eerie and lonely and unglamorous about roadside accommodation is summed up in this almost life size sculpture. It’s more Bates Motel than Sheraton. It reminds me of something in a Simon Stalenhag painting. If by bad luck we were granted entry to the Hotel, then we may be welcomed by twins in matching outfits and blood splashing down the walls. 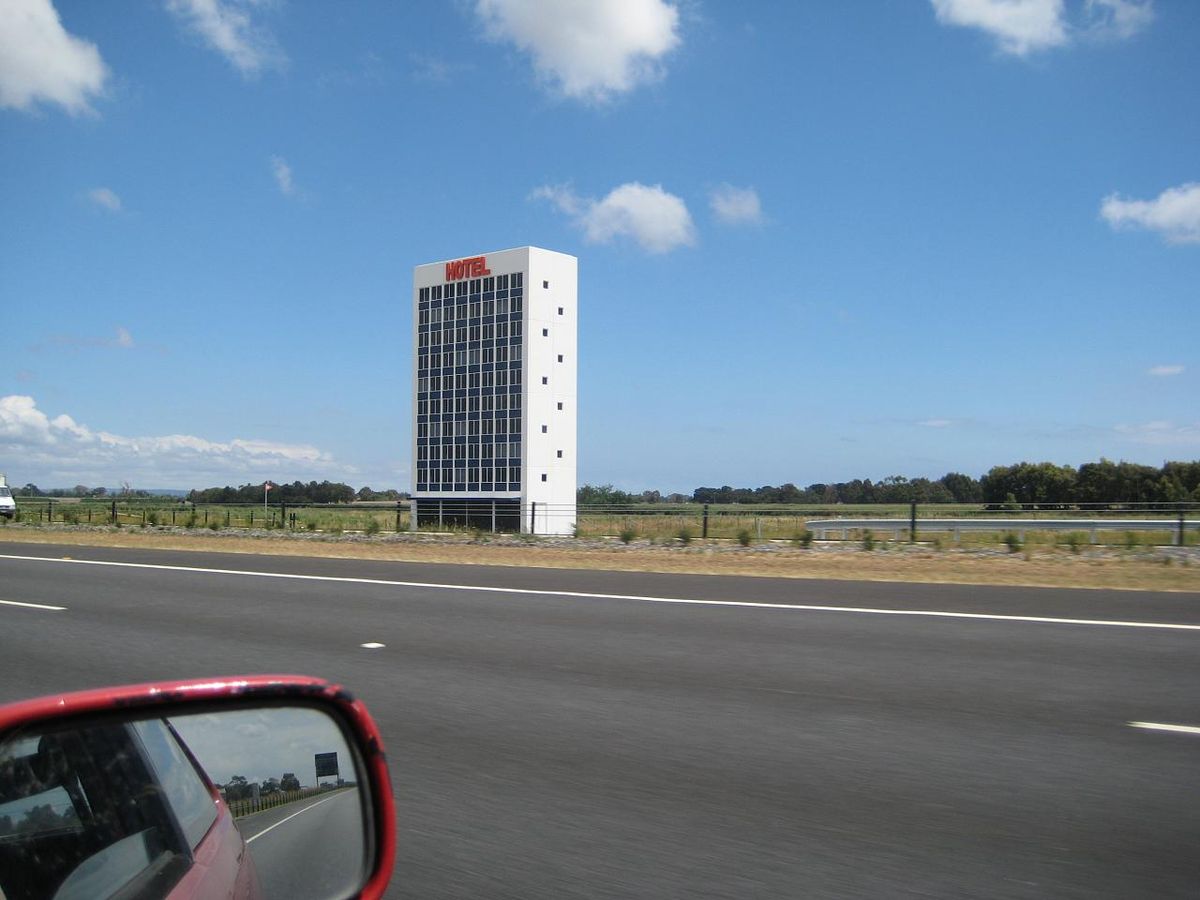 “I think it’s kind of interesting how putting something in a space that is slightly beguiling or is a little bit strange, how that maybe changes the way people think about art or practice Callum Morton

Another of Callum’s intriguing works

I’ve got a life-long obsession with places that have a trap door into another world, paper cities, future metropolises, fake food, abandoned towns and much more.

4 thoughts on “Gather up the night: An eerie hotel causes confusion on Melbourne’s Eastlink freeway”

If you enjoy my blog then you can buy me a coffee on Ko-Fi!