I had the pleasure of meeting Michel Faber at the Auckland Writers Festival this autumn. He’s a reserved, humble and softly-spoken fellow who was gobbled up by the overly bold interviewer, someone far less important, whose name escapes me.

Faber brought with him onto the stage a pair of dainty red women’s shoes and only later in the hour, explained their significance. They belonged to his beloved wife who has now left this earth due to a long and devastating bout with cancer. Faber takes the shoes along with him to places where she would have liked to go if she were alive.

He then proceeded to read an  electrifying and heart-rending poem. About how his wife when she had cancer was inescapably viscerally ugly but in his memory, she will be forever beautiful forever more. It was a fragile, human and vulnerable moment which laid bare one of the most incredible writers of the new century. I fell in love with him quite a lot when he did that, and so bought two of his oeuvre after the talk and got him to sign both The Fahrenheit Twins and his most recent novel, the Book of Strange New Things.

He signed both with a personal note, as personal and intimate as one can be at a book signing anyway. Strangely, I felt both touched by his personal message and saddened that I couldn’t know him more.

His physical presence takes up little oxygen and space, and yet his power with words is positively mind-blowing. His prose is sexy, earthy, visceral, heart-pounding and primal. It is darkly funny and sometimes just plain disturbing and deeply sad. Always though he exposes the quirky and disturbing, light and dark humanity within people, using language that has style and depth.

Dutch by birth and Australian by upbringing, Faber moved to the Scottish Highlands with his late wife because both of them suffered severe migraines caused by the bright  Australian sun. [I too migrated Scotland once because of  a need for misty mountains rather than harsh sun].

The Fahrenheit Twins is a short story collection was written in an edgy, intimate style where each character is intimately and passionately understood and their narrative voice sounding so natural and organic in his hands.

His tone of voice diverges quite significantly with his short story protagonists.

In Finesse, a political prisoner and world-leading surgeon is given a reprieve to conduct a life-saving surgery for a despotic dictator. The comical and dark tension between the two characters is palpable. The dictator when asked what his blood type is, replies incredulously ‘Well that’s easy, I have a man’s blood’. The surgeon’s response is ‘Nevertheless, I need to know it’s clinical type’. It’s funny, wry and dark. 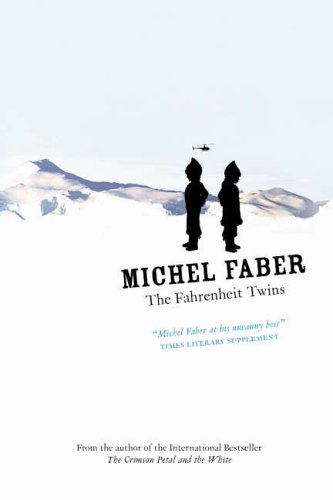 In The Eyes of the Soul, Jeanette lives in a hell-hole of a housing estate where through her front window, each day she witnesses people frequently get mugged and stabbed. A door-to-door salesperson offers her visual respite in the form of a screw in and switch on virtual reality which shows in full technicolour 24 hours per day a live feed from the “grounds of the Old Priory, in Northward Hill, Rochester”, in all of its Beatrix Potter glory.

The most disturbing and dark of all is The Smallness of the Action. The first lines of this are “On Wednesday morning, in a moment of carelessness, Christine dropped her baby on the floor and broke him.” It speaks directly to the shadow side of motherhood that involves in some rare cases, an amount of mental illness and post-partum depression that can lead to some women doing unspeakable things to their new borns. It’s dark, sad and disturbing and yet totally amazing writing.

It’s not all dark though. In Vanilla Bright Like Eminem a chance simple moment on a train in the Scottish highlands, between a family from America visiting on holiday to Inverness is the catalyst for one of the most happiest moments in a man’s life.

I can’t recommend this book enough. An exhilerating 10/10

5 thoughts on “Book Review: The Fahrenheit Twins by Michel Faber”