So basically, the CSIRO (Commonwealth Scientific and Industrial Research Organisation) in Australia have invented a truckload of good things. Insect repellent was one – out of necessity in  Australia no doubt. Polymer banknotes was another, and so was WiFi.

But probably their most esoteric and weird invention was a word to describe a smell. Petrichor.

Petrichor: a pleasant smell that frequently accompanies the first rain after a long period of warm, dry weather.

“Other than the petrichor wafting out of the wet and shiny grass, there was little evidence of the rain happening.”

Etymology: Derived from the Greek “petra” (stone) and “ichor” which, in Greek mythology, is the ethereal blood of the gods.

How Did Petrichor Become a Thing?

Strangely enough Petrichor was named and identified as a scientific phenomenon. A scientific paper published in ‘Nature’ journal in 1964 called Nature of Argillaceous Odour was written by CSIRO scientists Isabel (Joy) Bear and Richard Thomas.

Many natural dry clays and soils evolve a peculiar and characteristic odour when breathed on, or moistened with water, is recognised by all the earlier text books of mineralogy.

There is some evidence that drought-stricken cattle respond in a restless matter to this “smell of rain”.

Joy and Richard were determined to unlock that distinct after-rain aroma that they knew wasn’t simply in their imaginations.

By steam distilling rocks that had been exposed to warm, dry conditions in the open, they discovered a yellowish oil – trapped in rocks and soil but released by moisture – that was responsible for the smell.

The diverse nature of the host materials has led us to propose the name “petrichor” for this apparently unique odour which can be regarded as an “ichor” or “tenuous essence” derived from rock or stone. The oil itself was thus named petrichor -– the blood of the stone.

What causes the smell?

The smell itself comes about when increased humidity – a pre-cursor to rain – fills the pores of stones (rocks, soil, etc) with tiny amounts of water. While it’s only a minuscule amount, it is enough to flush the oil from the stone and release petrichor into the air. This is further accelerated when actual rain arrives and makes contact with the earth, spreading the scent into the wind. 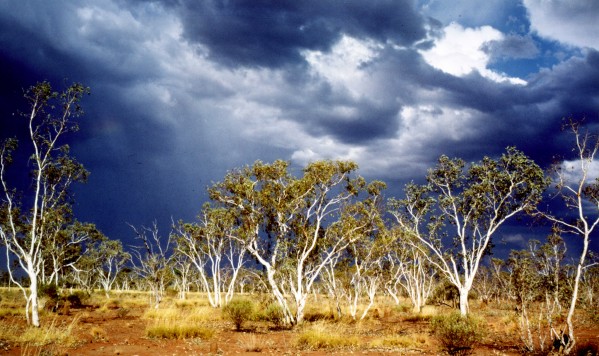 If you listen hard enough to this, you can almost smell that petrichor smell. Or watch the video below.