The Eurasian Lynx was once a part of primeval forests in Britain, but has since been hunted out of existence there. Nowadays with the deeper understanding of ecological balance, the importance of primary predators has been reasserted. In Britain, there’s an exciting new movement in 2015 to bring back the Eurasian Lynx to the forests, as they help to keep mammalian herbivore numbers in check. Read on to find out more about this legendary secret keeper of the forest.

They are incredibly regal looking

Their large ears are adorned with conspicuous black tufts, and the long cheek hair hangs down to form a facial ruff, almost like a beard or mane in winter. The coat is long and extremely dense, especially over the winter, and is more variable in colouration than in any other cat. Their shorter, summer coat tends to be more reddish or brownish in colour, the winter coat may be silver-grey, yellowish-grey, grizzled greyish-brown, ashy blue, or dark grey.

They have enormous paws and claws which enable them to climb trees and scale high rocks. A double layer of fur makes them agile and efficient hunters all year round.

The last time a lynx was seen in Britain’s forests was in 700 A.D.

Although they are an ancient species, human farming and also ongoing fur trapping over the centuries have decimated their numbers. Currently their range extends from the steppes in Russia to China and parts of Western Europe, but excludes the British Isles, Lynx populations were last seen there circa 700 A.D.

Now an ambitious reintroduction scheme aims to bring back the lynx!

The plan is currently with the Natural England and Scottish Natural Heritage (SNH) – the government bodies that regulate species reintroduction. The plan awaits public survey information for approval. If approved, four to six individuals wearing electronic tracking collars would be released on privately owned estates in Norfolk, Cumbria and Aberdeenshire. Click on the image to complete the public survey and tell them why they should bring the lynx back.

“The lynx is a magical animal,” says Paul O’Donoghue, a science adviser to the Lynx Trust, ”It is one of the most beautiful cats on the planet and its absence makes Britain a poorer place.”

They hunt around around dawn and dusk, but may occasionally actively hunt during any hour of the day. Their diet consists of exclusively meat, mostly mammalian herbivores such as roe and red deer wild pigs, beavers, hares, rabbits, small rodents. On very rare occasions when they are desperate they will attempt take livestock when food is scarce, however they it is incredibly rare to see them outside of the forest.

They are the third largest predator in Europe

Following the brown bear and the wolf.

Just like solitary cats, Lynx roam around the forest by themselves. They have a social organisation where males stake their claim to large ranges of territory and females have a territory that overlaps somewhat. Males in general will avoid each other and maintain their dominance through scent marking trees and other landmarks. They will keep to the forest and are incredibly elusive and hard to capture on film.

They are about the size of a medium or large dog 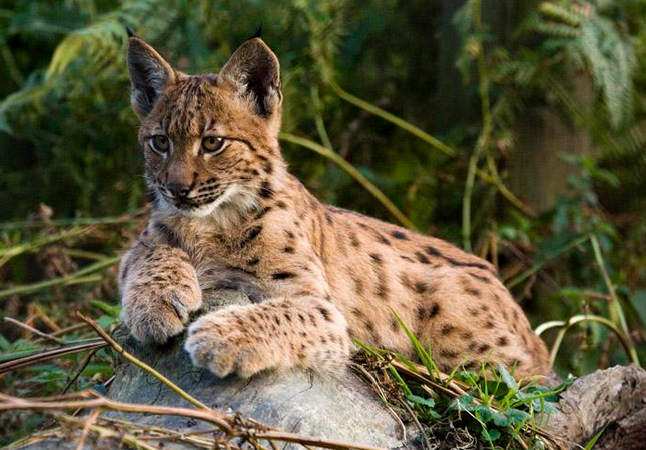 7 thoughts on “Help Bring Back The Eurasian Lynx To Britain!”