Found around the Gulf of California and Mexico these adorable slime-balls chomp on algae and live in intertidial zones usually not deeper than 18–20 m.[

They have been known to grow to a length of 75 cm and can weigh up to a heavy 7 kilos, enough to be taken as a carry-on luggage on a short-haul flight.

The sea hare emits toxins which means it has few predators. Although the giant green anemone reportedly eats them in large numbers; however will digest a portion of the giant slug and then spit it out again and so doesn’t exposes itself to the sea hare’s digestive gland and its associated toxins. Some starfish, lobsters and the ophistobranch Navanax inermis which will eat baby sea hares on occasion.

When threatened the sea hare releases two kinds of ink from different parts of its body, like an octopus. One ink is reddish-purple and comes from what is called the purple ink gland. The other ink is milky in colour and comes from its opaline gland, and contains the aversive chemical opaline. 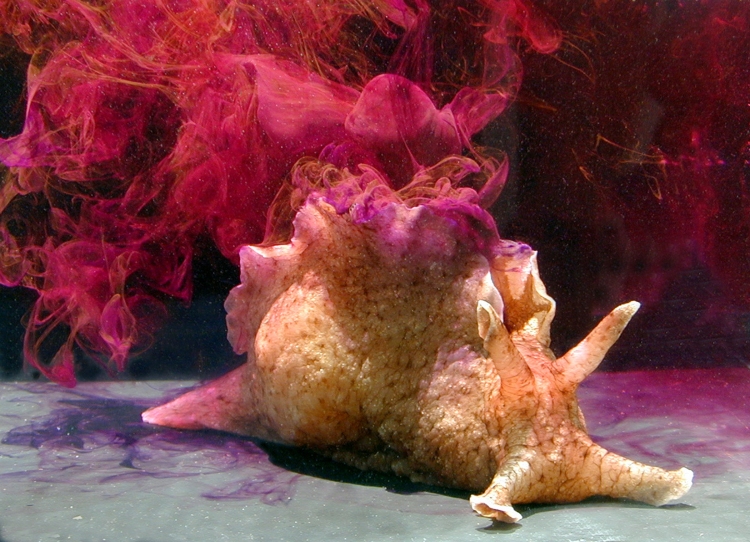 Like all sea hares, the California sea hare is a hermaphrodite and is known to form mating chains with up to 20 animals, each animal can serve as male and female at the same time. The eggs are yellow-green, and change after 8 to 9 days into a brown color before larvae hatch.

Coupling lasts for hours or sometimes for days, although the actual passage of the sperm may take only a few minutes. Egg laying normally has to be triggered by copulation, but it occurs spontaneously in individuals kept in isolation for up to 3–4 months (typically these eggs are unfertilized).[8]

Sex normally happens in the early morning, and only rarely after 12:30 pm. An individual animal weighing 2,600g was recorded to have laid about 500 million eggs at 27 separate times during less than five months.

Like all Aplysia species, the California sea hare is herbivorous and eats a type of red algae which in turn gives the sea hare same characteristic colour as its environment, so that it can easily be camoflaged by its surroundings.