The Mabinogion is a magical and mythical Celtic classic from the  thirteenth century or earlier. It’s thoroughly Welsh and is considered a masterpiece of medieval literature. Although written down during the middle ages, experts think these stories may date from the dawn of Celtic civilisation in Britain.

The Mabinogion has given rise to all of the stories by Tolkien, Le Guin, Martin and countless more. The stories are the very genesis of the Arthurian tales of King Arthur, Guinevere, Merlin and Sir Lancelot.

These fall into four tales of Pwyll, Branwen, Manawyddan, and Math.. Along with two short pieces The Dream of Maxen Wledig and Lludd and Llevelys; the incomparable Kilhwch and Olwen, one of the earliest Arthurian tales in Welsh; 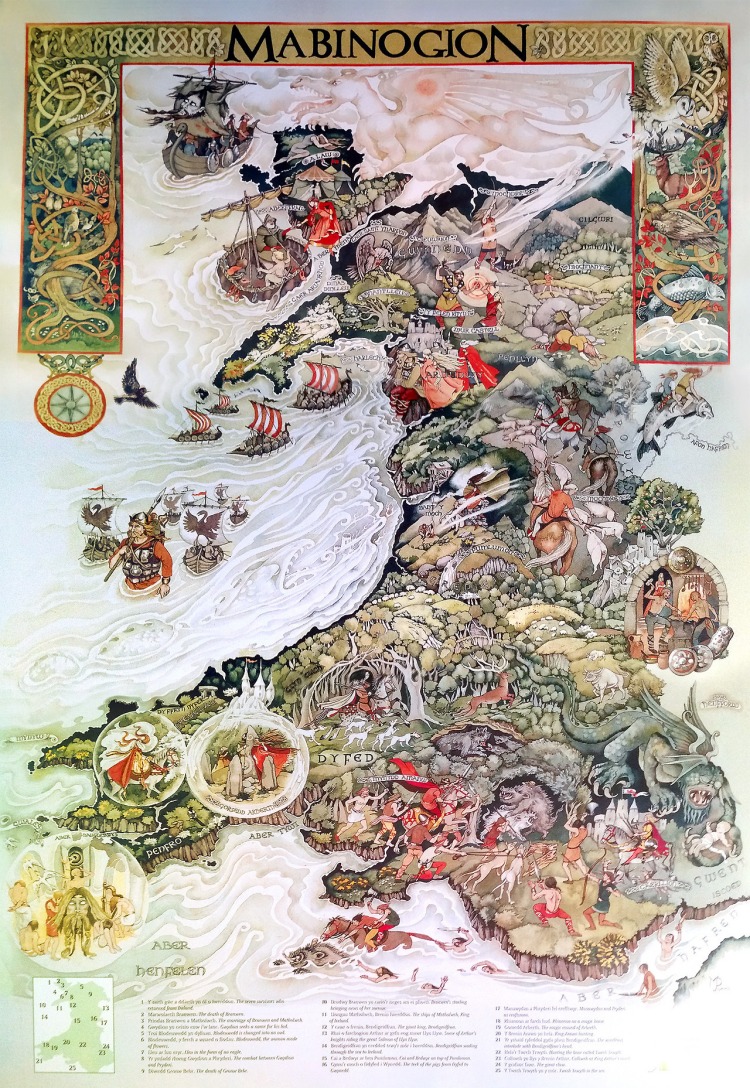 The Dream of Rhonabwy is a a romantic look back to the heroic age of Britain; and the three Arthurian romances proper: The Lady of the Fountain, Peredur the Son of Evrawc, and Geraint the Son of Erbin, with their abundant evidence of Norman-French influences.

I really want to read these tales of destiny, magic, chance, knightly feats of arms, love, and betrayal. They seem filled with beautiful and ancient beauty.

The Mabinogion has also given rise to many Welsh artworks such as this gorgeous map of Wales by Margaret Jones.

“It was my good fortune, in the twenty-five years from 1980, to illustrate for publication a number of the great traditional tales of the world, especially the stories of my adoptive country of Wales.”

In Margaret’s world, dragons, witches and giants jostle together  uncomfortably, Kings are made and heroes are born and characters go on quests for love, honour and revenge. Medieval Wales seems very intriguing.

You can purchase a modern Welsh interpretation of the Mabinogion here.