Bouvetøya, also known as Bouvet Island is definitely a contender for the most remote place in the world. I discovered Bouvetøya via an excellent Tumblr with the understated title of Map Design. This is a treasure trove of cartography. Another is the seminal book The Atlas of Remote Islands by Judith Schalansky.  This is a must-read for anybody obssessed with cartography, geology, remote places and the quirky little-known stories about obscure islands on this planet. In the past I’ve shown you another remote place which is also a candidate but this is probably the most uninhabitable and on the surface the most unremarkable to some people, but not to me. 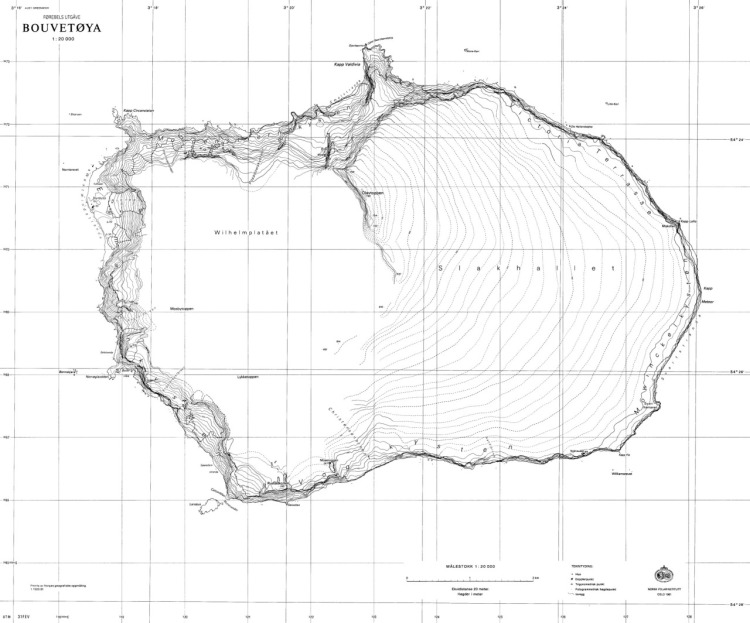 Discovered in 1739 by French ship commander Jean-Baptiste Charles Bouvet de Lozier; 93% of the 49 square km of Bouvetøya is glacier and in the cold interior an ice-filled inactive volcano is nestled. So needless to say, it wasn’t the subject of bloody battles and wars for supremacy. It’s located on the 50th parallel south. Exact coordinates in the South Atlantic Ocean are  54°25.8′S 3°22.8′E. It’s  2,600 kilometres southwest of South Africa and 1,700 kilometres north of Antarctica.

No humans live there and in the ensuing century Britain half-heartedly laid claim to it. This all changed in 1927 when Norwegian Harald Horntvedt stayed on the island and surveyed the area, staking the Norwegian flag in the ground. After some not-so-fussed discussions, Britain renounced it’s claim on the island and the Norwegians won their 49 square km of frosty rock.

In 1964, an unidentified whaler or ship’s lifeboat was found abandoned there. The boat bore no identifying marks. There were signs that survivors might have made it to shore, but no trace of them has ever been found.

Not much plant life exists on Bouvetøya, but at certain times of year the population of birds and seals swells enormously. There’s a black sanded beach on one side which provides a sheltering place for a colony of birds and seals. Bird species include king penguins, many species of albatross, petrels and shearwaters. In the freezing ocean nearby are large populations of krill and whales.

The Norwegians now use Bouvetøya as a weather station.