Following on from my previous post about Tyabb Packing Centre, here is another little known wonder from the Mornington Peninsula in Melbourne where I return to whenever I get the chance.

The Mushroom Reef Sanctuary is home to a gigantic mushroom shaped basalt reef near Flinders in Westernport Bay. Located 86 km from central Melbourne, it’s a fantastic day trip for beach-combing, sunbathing, snorkelling or bushwalking. As an added bonus it’s hidden away from the hoards that gather on popular beaches on the opposite side of the Mornington Peninsula in Port Phillip Bay.

What follows is a nature-lovers digest of the wonders of the Mushroom Reef Sanctuary. Along with photos taken on a recent day out there. 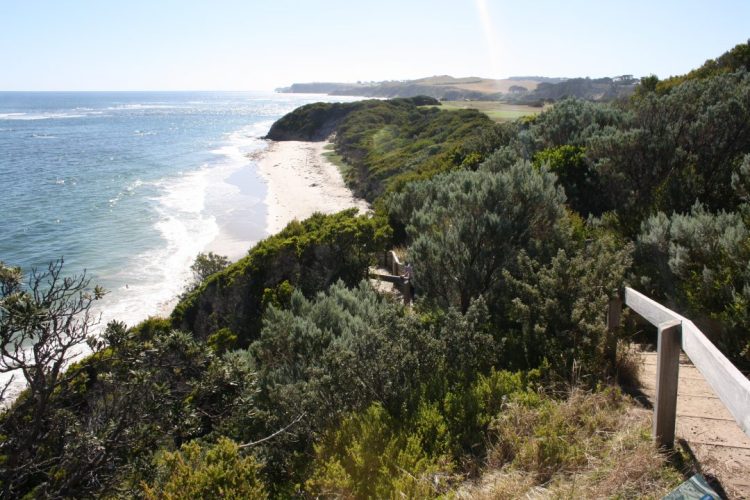 The vista from atop the cliffs is sublimely colourful with an array of textures and sparse, windswept spaces. Below the waterline there is a boldly hued collection of coloured reefs and substrates. These are covered by kelp forests, sessile invertebrates and seagrass meadows.

There is a dramatic looking basalt causeway that acts as a bridge between the intertidal region and a soft sandy beach.

These striations in the rocks are actually ancient basalt platforms and subtidal reefs. They are formed from solidified lava during the Eocene epoch of the Tertiary period, around 42 to 47 million years ago.

These basalt platforms can reach an impressive thickness of 600 metres at Flinders beach, and are hardened and petrified lava flows, that are also found along the coast of the southern Mornington Peninsula, Phillip Island and French Island.

The cliffs here are particularly curious in their formation and how they appear today.

During the Eocene era, the cliffs at West Head show that volcanic lava flowed during periods and hardened to form dark basalt. This is interrupted by a period of no lava flow, when there is plenty of plant fossils found in the strata. This is signified by the thin red layers you can see here. 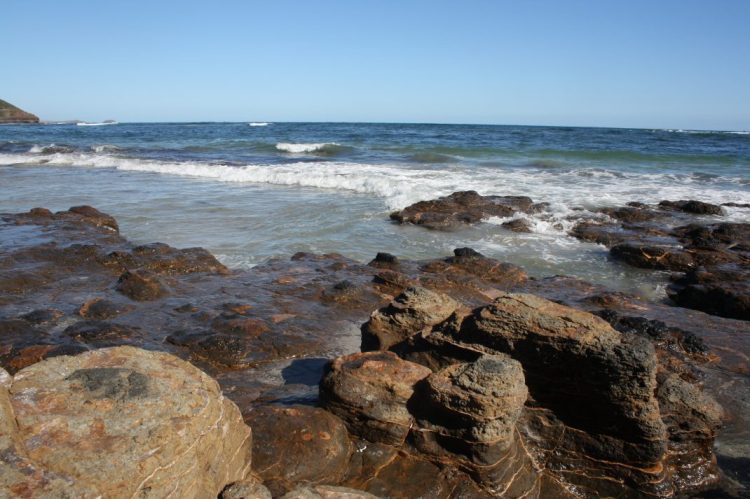 The limestone that is visible in the cliffs was laid down over the weathered basalt during the Pleistocene epoch.

Each of the basalt platforms in the mushroom reef form an interesting hexagonal shape. This pattern is formed by the cooling of the lava and the shaping of the ocean waves over millions of years. Eventually hexagonal columns turn into rounded columns and boulders that are found on the Mornington Peninsula.

At the outermost part of the basalt platforms, the force of constant ocean waves has produced perfectly rounded rockpools, with grinding rocks constantly stirring the pool in a circular motion at high tide.

The ocean here can get fierce, depending on the weather, with turmultuous waves breaking on the reefs adding to the drama of the place.

Beneath the shoreline there are wavering, undulating kelp and invertebrates. Within this aquatic wilderness, scientists and naturalists have identified many animal species they have never seen before.

Atop the cliff faces roost a whole host of migratory birds and threatened bird species. They sometimes come onto the sand to forage for a quick meal.

Before the invasion, the Boonwurrung clan lived here as hunter gatherers for approximately 30,000 years. Evidence of their use of the area is found in middens in the sanctuary. The intertidal reefs in this area would have given them ample fish and crustaceans to eat.

A Diverse and Thriving Selection of Microhabitats